In accordance with the requirements of the permit issued to the Texas Commission on Environmental Quality (TCEQ) on December 13, 2013 any small Municipal Separate Storm Sewer System (MS4) within a census defined "Urbanized Area" has to develop a Storm Water Management Plan (SWMP) and submit a Notice of Intent (NOI). The City of Balch Springs (City) is within the Dallas Urbanized Area and therefore is required to develop and implement a SWMP. The SWMP includes a listing of Best Management Practices (BMPs) that will be implemented by the City in order to achieve the regulatory standard of reducing pollutants in the City's storm water to the "maximum extent practicable." Existing City of Balch Springs stormwater ordinances and requirements will be modified with new BMP activities.

What is the Storm Water Management Plan?

The Stormwater Management Plan (SWMP) developed by the City of Balch Springs is described in the following PDF Document below. It describe the six MCMs and the best management practices (BMPs) employed by the City. An implementation schedule for each of the BMPs, the measurable goals and responsible parties associated with individual BMPs is included.
Prior to any major change, removal or replacement of a BMP identified within this SWMP, the City shall comply with the general permit requirement to submit a Notice of Change as specified in the general permit. Also with the requirements of the General Permit. The City will submit an Annual Report to TCEQ which will track and record the implementation of the SWMP.
The SWMP for the City of Balch Springs was developed by considering permit requirements, other City SWMPs, information from NCTCOG meetings and other resources. The City of Balch Springs is also participating in the Regionally Developed Initiative (RDI) program developed through the NCTCOG. This program is designed to provide stormwater quality improvements on a regional scale by sharing information and coordinating resources and efforts.
The City Manager shall direct a staff position, as the primary point of contact for SWMP questions and comments. Contact information is contained in Appendix A for the primary point of contact and all other parties with responsibilities for implementing the SWMP. 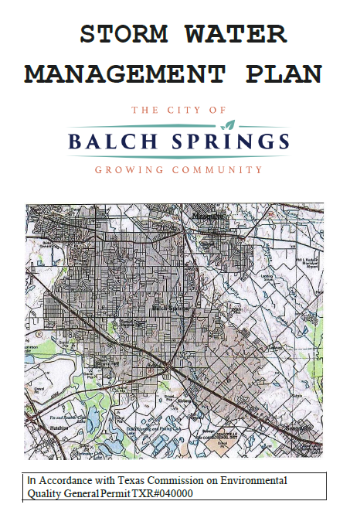